The Department of Health and Human Services (HHS) announced March 9 that nearly $35 million in funding is available nationally to strengthen and expand community mental health services and suicide prevention programs for children and young adults. Grants are available through the Substance Abuse and Mental Health Services Administration and the Office of Minority Health.

The funding will be divided among seven grant programs, which are part of a larger Biden administration initiative to address the nation’s mental health crisis. More information on each of the grants is available in the HHS news release. Members with questions may contact Lauren LaPine at the MHA.

Several federal agencies, including the Office of Personnel Management and the departments of Health and Human Services (HHS), Labor and Treasury, recently released “Part 1” of the regulations to implement the No Surprises Act via an interim final rule with comment period. The rule would implement many of the law’s requirements for group health plans, health insurance issuers, carriers under the Federal Employees Health Benefits program, healthcare providers and facilities, and air ambulance service providers. Most of the provisions would take effect Jan. 1, 2022, and would:

The rule does not apply to individuals with coverage through Medicare, Medicaid, Indian Health Services, Veterans Affairs Health Care or TRICARE, since these programs already prohibit balance billing. The federal regulations also would establish requirements regarding initial payment or denial by health plans to providers, with health plans having 30 calendar days to make a payment or issue a denial notice after receiving a “clean claim.”

The MHA also encourages members to review the proposed rule and contact Vickie Kunz at the MHA regarding any concerns by Aug. 27 and to submit comments on the interim final rule by Sept. 7. 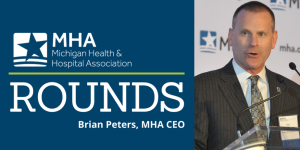 “You want a friend in Washington? Get a dog.” – Harry S. Truman

I have a dog — a beautiful German Shepherd that joined our family in the midst of the pandemic.  I know that many of you have a family dog too, and they are indeed wonderful friends. But as it turns out, the MHA family is also fortunate to have friends in Washington, DC, and never before has that been more important.

Hospitals and health systems play a key role in their local communities, both as healthcare providers and economic engines. While much of the funding, regulatory, and other public policy decision-making occurs at the local or state level, the truth is that federal politics has become increasingly important, as decisions made at the federal level can have profound impacts on the healthcare delivered in Michigan. The dramatic increase in enrollment for both Medicaid (a shared state/federal program) and Medicare (a strictly federal program) is just one of many reasons why.

Over the years, the MHA’s engagement at the federal level has increased dramatically, to the point where we have now established meaningful relationships with the entire Michigan congressional delegation and their staffers. These relationships were on display early in the pandemic when we were able to convene conference calls with our delegation — both Republicans and Democrats together on the line at the same time — to listen to our insights and requests and target much-needed assistance to our members who were dealing with a true crisis. We have done all the blocking and tackling that is instrumental to federal advocacy, including routine in-person visits to our delegation members’ DC offices, developing congressional district-specific data and talking points on key issues, coordinating closely with the government relations officers of our member health systems (including those with multistate operations), organizing fundraising events and much more.

We are fortunate to have a very close partner in this regard: the American Hospital Association.  I’m happy to share that more than 100 of our Michigan community hospitals are also AHA members, a penetration rate that puts Michigan in the very top tier nationally. As a result, our voice is heard clearly as many Michigan healthcare executives are actively involved in the policymaking process of the AHA, serving on various committee and task forces, including the AHA’s Regional Policy Boards. In this manner, we are able to identify needs unique to our region and provide direct input on public policy — and political strategy — to the AHA.  On that note, we are fortunate that Michigan’s own Wright Lassiter, president and CEO of Henry Ford Health System, is now the chair-elect of the AHA Board.

In addition, the MHA’s political action committee, Health PAC, also has a formal working partnership with the AHAPAC, allowing us to support our members of Congress in this important way.

Recent examples of this partnership in action include our advocacy to protect the Affordable Care Act (ACA), as well as the 340B Drug Pricing Program, and our efforts to combat the COVID-19 pandemic. Several weeks ago, the United States Supreme Court released its opinion in the California v. Texas case that challenged the constitutionality of the ACA. The opinion reversed the Fifth Circuit’s judgement in the matter and upheld the constitutionality of the ACA. The MHA was formally involved in the case, as we joined a number of other state hospital associations in filing an amicus brief with the Supreme Court. We are very pleased with this outcome, which will help to preserve coverage for as many Michiganders as possible — a key MHA priority.

The MHA has also been involved in the federal legal strategy to support the 340B Drug Pricing Program, which is a federal program created by Congress to help provide relief from escalating drug prices to safety-net hospitals and other healthcare providers serving vulnerable patient populations. Over the past year, six drugmakers have stopped providing discount drug prices for pharmacies that contract with 340B providers. The MHA is working with the American Hospital Association Advocacy Alliance for the 340B Drug Program and the 340B Health coalition to protect this vital program. Last fall, the MHA organized a letter to the Michigan congressional delegation that was signed by representatives from 68 of the more than 80 Michigan 340B hospitals to share hospitals’ concern regarding drug manufacturers’ attempts to limit payment to contract pharmacies and other actions that are a significant detriment to 340B hospitals and the services they can provide to eligible patients because of the program. The MHA also joined other state hospital associations earlier this spring in submitting an amicus brief in support of the AHA’s petition to the U.S. Supreme Court for certiorari (a formal request to the court to take up the case) in its appeal of an appellate court decision unfavorable to hospitals on 340B.

Lastly, the MHA has been involved with various aspects of the COVID-19 response at the federal level, from advocating for provider relief funds to providing data and insights on the impact of the pandemic. In May, the MHA worked quickly to get a majority of Michigan’s U.S. House delegation to sign onto a letter urging Department of Health and Human Services (HHS) Secretary Xavier Becerra to extend the deadline for hospitals to use provider relief funds. This joint effort with the AHA and other groups ultimately led to the HHS announcing extended deadlines by which hospitals and other providers that received Provider Relief Fund (PRF) money may use their COVID-19 PRF payments. We also had several MHA members directly involved in submitting statements to Sen. Gary Peters on the impact of healthcare supply chain shortages during the pandemic, which were utilized by the Senate Homeland Security and Governmental Affairs Committee that Sen. Peters chairs.

The MHA is currently working on a comment letter for the recently released federal Occupational Safety and Health Administration (OSHA) Emergency Temporary Standards (ETS). Although the AHA achieved several improvements in the final proposed ETS, a number of issues remain. Because Michigan uses a state plan for OSHA regulation, MIOSHA adopted these rules June 22. The MHA is aware that the federal ETS is under regular review and amendments are possible. Filing comments brings attention to those parts of the rule that require further action.

Laura Appel, MHA senior vice president of health policy and innovation, has done an outstanding job as our point person on federal advocacy for many years now. I can tell you from firsthand experience that she knows her way around the federal policymaking process as well as she knows her way around the maze of offices on Capitol Hill. In addition, MHA Executive Vice President Chris Mitchell is serving as the chairman of the SAGRO (State Association Government Relations Officers) group, representing all the state hospital association advocacy leaders. MHA Chief Medical Officer Gary Roth, DO, is also serving as chairman of the SHAPE (State Hospital Association Physician Executives) group, leading his peers across the country. And for the past year I have had the privilege of serving as the chairman of the AHA State Issues Forum, which is the group of state hospital association CEOs focused on the strategic issues that we all share. Collectively, these engagements are just another indication of the stature and leadership of our association on the national level.

As you can see, our dedication to advocating for our members — and the pursuit of our mission to advance the health of individuals and communities — extends from Lansing to Capitol Hill. I am proud of the strong foundation that we have established in this regard and, given the increased focus on hospitals and healthcare in the national conscience as a result of the pandemic, I am convinced that our work at the federal level will continue to be critical.

As always, I welcome your thoughts