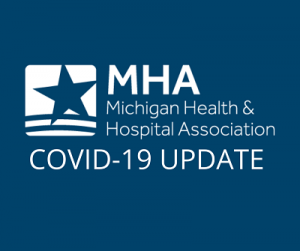 The MHA continues to keep members apprised of pandemic-related developments affecting hospitals through email updates and the MHA Coronavirus webpage. Important updates are outlined below.

The U.S. Food and Drug Administration (FDA) Aug. 23 issued full approval of the Pfizer COVID-19 vaccine for individuals 16 and older, making it the first shot to move past the emergency use authorization phase. In doing so, the FDA reviewed hundreds of thousands of pages of safety and efficacy data, reaffirming the mRNA vaccine to be highly safe and effective. The MHA issued a media statement about the approval shortly after the announcement. For children ages 12 to 15, the shot remains under emergency use authorization. Emergency authorization of this and other vaccines for anyone younger than 12 remains outstanding and could come by the end of 2021.

The required vaccine fact sheets for providers’ use have been updated and are posted to the state’s Pfizer-focused webpage.

The lack of FDA approval has been a primary talking point for individuals delaying getting their COVID-19 vaccines. The MHA is communicating with media outlets and on its social media channels about the approval and where individuals can get vaccinated, especially as children head back to school. As of Aug. 23, the rate for children ages 12 to 15 who are fully vaccinated was 30%, and the rate for children ages 16 to 19 was 39.2%.

First doses of the vaccine continue to be administered at a slow but steady pace, with Michigan having administered nearly 154,000 first doses from Aug. 1-26. Providers – especially those who see younger patients – are urged to do direct patient outreach to increase vaccination rates and ensure those who are immunocompromised get a third dose if they received an mRNA vaccine. The MHA is developing provider outreach tools for practice settings to assist with these efforts.

Members with vaccine questions may contact Ruthanne Sudderth at the MHA.

Bridge Magazine, which the MHA supports as an underwriter of its Health Watch series, is hosting a free, online, one-hour conversation on youth mental health in Michigan from noon to 1 p.m. Aug. 31. MHA members are invited to participate in the online event by registering online.

The dialogue will include a description of the state of youth mental health services in Michigan as well as potential solutions for improving the availability of mental healthcare for youth and their families. Improved access to high-quality behavioral health services for Michiganders remains a top priority of the MHA, as evidenced by its proposal for an additional $125 million in the state budget dedicated to this issue. The MHA Board of Trustees held a robust discussion on behavioral health at its recent meeting, and more details on how the association will be dedicating resources to this issue are forthcoming.

Additional information on the COVID-19 pandemic is available to members on the MHA Community Site and the MHA COVID-19 webpage. Questions on COVID-19 and infectious disease response strategies may be directed to the Michigan Department of Health and Human Services Community Health Emergency Coordination Center (CHECC).

The Michigan Legislature completed most of its lame-duck agenda during the week of Dec. 14, addressing a wide range of issues impacting hospitals. The most notable legislation included a supplemental appropriations bill for COVID-19 relief, an extension of unemployment insurance benefits, and several Certificate of Need (CON) bills. The House is expected to meet during the week of Dec. 21 to concur on substitute bills passed by the Senate, but no further voting is expected in the Senate in 2020.

The supplemental spending bill passed by the Senate totaled $465 million and included several line items to directly assist hospitals. Senate Bill (SB) 748 provides $10 million as grants to hospitals for staffing assistance, $17.8 million for remdesivir Medicaid reimbursement, $48 million for additional vaccine and testing capacity, $100 million to continue the direct hazard pay adjustment for direct care workers and first responders, and $15 million to replenish the state stockpile of personal protective and other emergency equipment. The appropriations provide significant relief for MHA members to close out the legislative year, and the association supported the bill. SB 748 also allocated $220 million to extend unemployment insurance (UI) benefits through March 31 to assist unemployed Michiganders. MHA-supported SB 604 would extend UI benefits from 20 to 26 weeks, continue to not charge employers’ individual accounts for COVID-19-related claims, allow employees to use UI for COVID-19-related absences, and continue to expand the UI Workshare Program until April.

Final changes were made to several CON bills and sent to the governor’s desk. SBs 669, 671, 672 and 673 would add two members to the CON commission representing the public (SB 671), increase the threshold for covered capital expenditures to $10 million (SB 669), remove psychiatric beds as a covered service in counties with fewer than 40,000 residents (SBs 672 and 673) and remove air ambulance as a covered service starting June 1, 2021 (SB 672). Language was removed from SB 672 that would have automatically expanded the number of counties exempted from psychiatric bed CON requirements in future years. The MHA continues to support SBs 669 and 671 and remains neutral on SBs 672 and 673. The Legislature also passed SB 1160, which would amend the CON statute related to swing beds by removing the existing requirement that hospitals provide evidence of difficulty placing patients in skilled nursing home beds during the 12 months prior to the swing bed application. The MHA did not take a position on SB 1160.

COVID-19-related legislation also included SB 1185, which would provide an additional period of liability immunity for healthcare providers and facilities. The extension would last from Oct. 29, 2020, to Feb. 14, 2021, and was supported by the MHA. SBs 879 and 920 would continue authorization for early prescription refills, pharmacy operational changes and the 60-day prescriptions that were addressed in Executive Order 2020-61. The MHA did not take a position on SBs 879 and 920.

The Legislature also passed SB 1253, which puts a 28-day time limit on emergency orders from state departments before requiring a vote by both chambers of the Legislature. The MHA opposed the bill, which now moves to the governor’s desk.

Several bills addressing behavioral health were sent to the governor’s desk. MHA-supported SB 758 would add Michigan to the interstate psychology licensure compact, which is intended to permit the practice of telepsychology across state lines without applying for another license. Two other behavioral health bills were passed to create new licensure options for facilities. HB 5832 would create a license for crisis stabilization units, and HB 5298 would establish licensure for psychiatric treatment facilities for Medicaid recipients under the age of 21. The MHA did not take a position on either bill. Both chambers also approved SB 813, which would require a report to the Legislature on psychiatric patient deaths that occur within 72 hours of treatment. SB 813 was amended to ensure that the Michigan Department of Health and Human Services would be responsible for reporting, and the MHA did not take a position.

Finally, the Legislature passed HBs 4186 and 4187, which would establish the data breach notification act. This package has been in progress for several years and maintains the exemption for hospitals that was previously negotiated. The MHA remained neutral on the bills.

Members with questions on legislative action should contact Adam Carlson at the MHA.