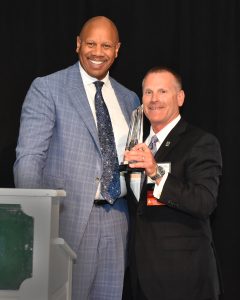 The MHA announced the 2022 winner of its highest achievement award June 30 during the association’s Annual Membership Meeting. Receiving the award for his leadership in the fight against COVID-19 is Wright Lassiter III,  2022 chair of the American Hospital Association Board of Trustees and former president and CEO of Henry Ford Health.

At the onset of the pandemic in March 2020, Lassiter became a leading advisor to the City of Detroit and state officials. Under his leadership, Henry Ford Health quickly charted a path for vaccine research and served as a leader for the trials of the Moderna and Johnson & Johnson vaccines. Henry Ford Health was chosen as the medical director for the state’s mass vaccination site on Detroit’s Ford Field. It was the first health system in the state to require workforce vaccination across its multiple locations, helping to keep its staff, patients, visitors and communities safe. Lassiter also provided input and guidance to the governor’s office during the pandemic as a member of the Michigan Economic Recovery Council.

Lassiter has more than 30 years of experience in large, complex health systems. He joined Henry Ford Health as president in December 2014 and became president and CEO in 2016. During his tenure, he has led the board and senior management to position the system for the future, completing two successful mergers, expanding its geographic footprint, generating an additional $1 billion in revenue, and opening partner hospitals in Saudi Arabia and India.

Lassiter has received many accolades, being named Crain’s Detroit Business’ Newsmaker of the Year in 2022 and Michiganian of the Year by The Detroit News in 2020, receiving the 2021 Crain’s Detroit Business Health Care Heroes – Corporate Achievement Award, and more. Lassiter gave the Spencer C. Johnson Health Policy Lecture June 30 during the 2022 MHA Annual Membership Meeting. In August, he will become the CEO of Chicago-based CommonSpirit Health.

The registration deadline is May 27 for the MHA Annual Membership Meeting June 29, 30 and July 1 on Mackinac Island. COVID-19 vaccination is required for attendees 12 years of age and older; details surrounding the vaccination verification process are outlined on the Code of Conduct section of the annual meeting webpage.

On June 30 the lineup of outstanding healthcare experts include Scott Gottlieb, MD, a physician and former commissioner of the U.S. Food & Drug Administration, and Wright Lassiter III, president and CEO of Henry Ford Health and board chair of the American Hospital Association. On July 1, Tim Alberta, an award-winning journalist and writer for The Atlantic will share his views on federal and state politics, and street artist David Garibaldi, who has performed at the NBA finals and was a finalist on network TV’s America’s Got Talent, will create four paintings before attendees’ eyes and share his journey from a street artist to performing on the biggest stages in the world.

In addition to the numerous networking opportunities, attendees can support health improvement initiatives led by hospitals and health systems by registering to play in the Links Fore Health golf outing. The outing is a nine-hole scramble, and golfers may register individually or in pairs. Prizes are given in a variety of categories. The Links Fore Health outing sponsor partner is Kitch Drutchas Wagner Valitutti & Sherbrook.