The MHA encourages its staff, members and other stakeholders in the healthcare community to vote in the state’s primary election Aug. 2. Polls will be open from 7 a.m. to 8 p.m. Sample ballots are available through the Michigan Secretary of State website, and additional information and resources can be found on the MHA Election 2022 webpage. Voters may only vote in one party section for the entire ballot. Ballots with votes in more than one party section will not be counted. Voters are also encouraged to vote in nonpartisan sections of their ballots. 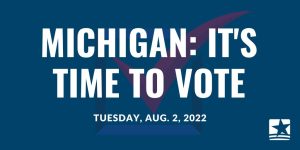 Those who would like to ensure they are properly registered or need to verify their precinct number may click on “Your Voter Information” on the Michigan Secretary of State website and type in the requested information. The November 2018 passage of the state constitutional amendment, Promote the Vote Ballot Proposal, allows citizens to register to vote up to and on Election Day at their local clerk’s office.

The 2022 gubernatorial and midterm elections are critical to Michigan’s healthcare future. In addition to choosing the next governor, secretary of state and attorney general of Michigan, voters across the state will decide political contests that impact the legislative and regulatory environments faced by hospitals and the patients they serve, including two Michigan Supreme Court seats and all seats in both the U.S. House of Representatives, the Michigan House of Representatives and the Michigan Senate. Based on the political makeup of legislative districts, the results of the primary election often determine who will take office in January.

Following the August primary and the Democratic and Republican state conventions at the end of the month, the MHA will once again offer members a series of nonpartisan communication tools designed to encourage voter education and participation at the local level for the Nov. 8 general election. The MHA will also feature regular election updates on its Facebook and Twitter feeds using the hashtag #MIVoteMatters. Members with questions should contact Sean Sorenson-Abbott at the MHA.